It was a serious thing when I did my morning walk.  I took a  route which led me to the Statue of David at Bonguyan Beach Area.  I was sweaty and ready to give up when I reach the seawall.  I walked on the seawall and when I turned around and reached the Statue of David, it was already buzzing with activity.  Loud music can be heard and of course, there were quite a number of matronly ladies dancing or exercising with the music.

It would have been a delightful but watching these women stretching their muscles in front of the statue a laughing matter.  I saw something primitive with what I saw as I easily thought or perceive that the ladies were performing some ritual act. What made it funny was that the ladies where dancing with the butt of David in front of them.It made me laugh watching them. Here is the video to prove my point. 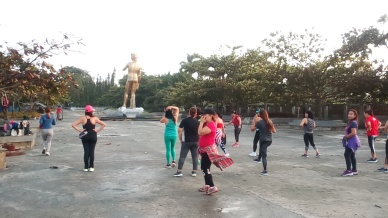 I also took picture highlighting the frontage of the statue with the ladies looking like minute details at the back of David.

I believed that the ladies are quite motivated dancing at the back instead at the front. Hahahahhha!!!!